It is time for a new adventure.  My pipe smoking seems to hit a sharp rise when the weather begins to cool.  Plus it gives me more reason to work from home as a pipe aids the issues of the working day tremendously. But what of the adventure?  This will be an adventure in pipe dedication, an adventure in dedicated pipe smoking and most importantly an exploration of one of my favorite simple pleasures.  Having been raised in a Presyterian church (though not a very "serious" one) this tobacco has always had some allure.  I don't, however, think of the cutting edge, pop-worship media orgy in which I was introduced to the word "Prebyterian."  I think, rather, of simple joyful people.  In simple clothes.  I think of great men like Jonathan Edwards, Charles Hodge and John Calvin.  While I have many serious reservations with many of the assumptions of Reformed theology, these were great men, and they constitute part of my reason for wanting to enjoy this tobacco.  So is that it? Just another of my sentimental psuedo-tobacco review? NO!  That was just the preamble!

I did pick up one other little item:

This spool is the latest addition to my collection of pipes.  I don't know if I have mentioned how much I love corncob pipes but I do.  I currently have four (the Legend, General, a stubby, and now a Spool). I have given a few away over the years, lost one and retired a small handful as well.  I love just about everything about the cob.  The looks, the smoking experience, the price, the comfort, everything.  I own other pipes because I like briar and clay as well!  This pipe, however, will have a high calling indeed.  This will be the Presbyterian Cob.  I am going to try to smoke nothing but this tin until I am through it, and do so in no pipe but this pipe.  And I plan to document this experience, if it turns out to be worth documenting. So here goes:

Smoke #1:  Just breaking in the pipe. The spool gets hot around the middle, as one would expect, and breaking in a pipe is never the most pleasant experience for me.  But I had to get it out of the way.  In spite of the general inconvenience of breaking in a new cob the tobacco did occasionally make it's way through.  It is a nice tobacco taste.  I can see why Mark Twain would find another ("a worthless man") to break his in for him!  Though little more could be said about how much I really experienced it, as the taste of the cob really muddled things.

Smoke #2:  (While writing).  Still some break in taste, however more of the tobacco is coming through today.  Some nice light flavors.  I like the mellowness of this tobacco and it seems to capture some of the beautiful austerity and seriousness that I associate with the Christ-loving Presbyterians of ages past.  There seems to be quite a bit of a nicotine punch, but that may just be that I have been smoking less of late.  Never a good decision!

So there it is, dear reader.  Thank you for visiting.  Fear not, I will not bore you with too much repetition in this series as I imagine the smoking will plain out as I learn this new pipe and this new tobacco.  However, I want to really dedicate some time to this classic of pipe tobacco enjoyment.  Sometimes it is good to read a book very quickly so as to draw the pith out of it.  Other times, one can sit an enjoy every word, every sentence and become engorged in it.  This is the experience that I am hoping for!
Posted by Bradley W. Maston at 1:03 PM 2 comments: 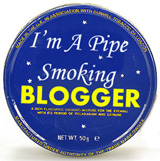